Wheels and Waves is Europe's landmark surfing and motorcycling festival, held every year in the city of Biarritz, France, bringing together the multifaceted world of motorcycles with surf & skate culture, through a philosophy of music and style in a vintage theme. The festival celebrates not only the machines, but the entire culture and lifestyle associated with riding and surfing. Wheels and Waves is one of the most anticipated events in the custom motorcycling scene.

In its fourth year at the festival, Royal Enfield stayed true to the spirit of the festival and illustrated its expression of ‘Pure Motorcycling’, that reflects through a rich custom culture. Royal Enfield unveiled three of its most anticipated custom renditions, the ‘Lock Stock’, ‘Rohini’, and ‘Interceptor’, which have been developed on the twin motorcycles - Interceptor INT 650 and the Continental GT 650, powered by Royal Enfield’s first modern day 650 twin engines. 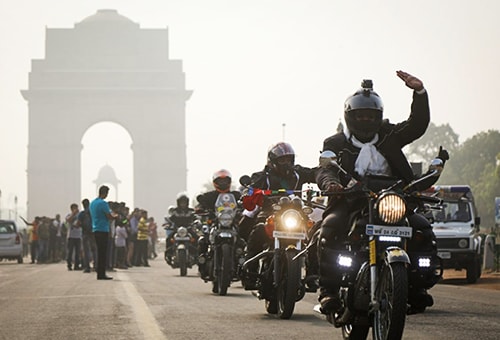 Flag off of the 15th edition of Himalayan Odyssey at India Gate, New Delhi